Once the sidewalks are shoveled and the roads are clear, take advantage of the free concerts offered in our area this weekend and go out and enjoy some fine music by our many talented local musicians. I wrote about many St. Patrick’s Day musical celebrations last week, including one piano concert taking place right here in Pennsburg, the annual Grace Notes Studio Piano Party. No tickets are required to enjoy some Celtic songs, among other music, that will be played by the students. The wearing of green is encouraged (although no green beer will be served on this occasion!); Friday, March 17, 2017, 7 p.m. at Keh’s Hall, Perkiomen School, 200 Seminary Avenue, Pennsburg, PA. 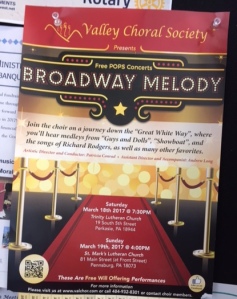 Celebrating their 140th year, The Quakertown Band invites the public to their Anniversary Concert on Sunday, March 19, 2017, beginning at 1:30 p.m. at the Strayer Middle School, 1200 Ronald Reagan Drive, Quakertown, PA.

This year marks our 140th anniversary!! The Famous Quakertown Band has been performing for 140 consecutive years!! So the music we’ve programmed is hand picked to celebrate this momentous occasion! You’ll hear all kinds of music from the last 140 years. Music From Frederick Handel’s opera Xerxes (1738) to John Mackey’s contemporary Xerxes (in the 2010’s). Marches, and broadway show music, and standard band literature… We’re even playing excerpts from Antonin Dvorak’s New World Symphony! Musically, this will not be a free concert you can afford to miss!!

The concert will also be celebrating trumpet player Maynard Cressman’s 60th year playing with the band and will feature his playing in a special arrangement of Trumpeter’s Lullaby, one of his favorite pieces to perform from decades ago.

The first day of spring is next Monday, March 20th (no promises as to whether all the snow will be gone by then), and therefore the first “official” springtime concerts that I know of in our area will be held in Souderton and Harleysville, on Thursday, March 30th and Friday April 7th, respectively, by Sola Gratia Musicians. Multiple choral groups will be singing a mix of sacred and secular music. The concerts begin at 7 p.m. and are free and open to the public. Thursday’s concert (March 30, 2017) is at Immanuel Leidy’s Church, 273 West Cherry Lane, Souderton, PA. Friday’s concert (April 7, 2017) is at Franconia Mennonite Church, 613 Harleysville Pike, Telford, PA.

SGM has grown from its first enrollment of 23 choristers to a high of 115. Over the years our students have had amazing opportunities to work with modern composers Morten Lauridsen, Rollo Dilworth and Craig Courtney. They have enjoyed a choral exchange with the Princeton Area Homeschool Choir, attending Cairn University Choral Festivals, working with Dr. Joe Ohrt of Central Bucks High School, singing back-up for Adam Jacobs (currently starring in Aladdin on Broadway) at a local Amazing Grace, the Musical reading.

Many of the musicians performing in concerts this month may also be seen and heard at Make Music Upper Perk on June 21st. And March is the month to show your (financial) support for the all day, community wide, celebration of music, featuring free concerts and musical performances of all types, including campfire sing-alongs, the Red Hill Band, Valley Choral Arts, singer-songwriters, punk rock bands, dulcimers, and so much more, at over ten locations around the Upper Perkiomen Valley. Our Kickstarter campaign to support this all volunteer non-profit event ends on March 31st, so please make your donation today!